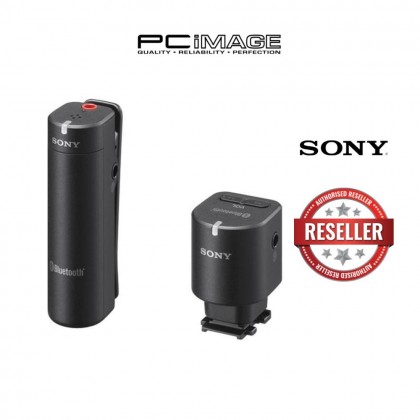 The Sony ECM-W1M Wireless Microphone is designed specifically for Sony cameras and camcorders that feature the proprietary Multi-Interface Shoe. The microphone comprises two components: a transmitter and a receiver. They communicate wirelessly with each other using Bluetooth technology and feature a range of up to 100', depending on conditions. With the receiver attached to your camera it is still possible to capture additional audio using the camera's built-in microphone. In addition, audio picked up by the camera can be relayed back to the transmitter. The transmitter features a headphone jack that allows the camera operator to communicate with the person wearing the transmitter by speaking into the camera's microphone. There is also a headphone jack on the receiver so that the camera operator can monitor audio even if the camera itself doesn't provide a headphone out of its own. Finally, the transmitter features a 3.5mm mic input allowing you to use a third-party microphone rather than the built-in one.